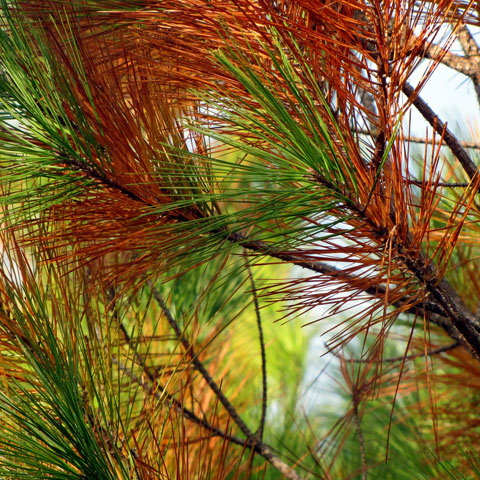 Known as Sphaeropsis Tip Blight also called Diplodia, is a disease caused by the Diplodia Pinea fungus. This disease influences coniferous pine trees mainly ones with needles with bunches of 2’s and 3’s.

Diplodia mainly infects well developed trees (25 years+), with the exception of young tender seedlings. It is very rare for a tree to be infected with Diplodi under 15 years of age.

Diplodia is most commonly found in urban areas where the trees are being used for esthetic purposes. The disease thrives in urban areas as it’s not in its natural environment. This causes stress on the Conifer tree and makes for an ideal breeding ground for Diplodia to attack and thrive.

WHAT ARE THE CAUSES?

When a mature tree is under stress and is then exposed to the Pinea fungus this is what causes Diplodia. The fungal infection attacks in multiple ways starting with new shoots growing on the plant then moving outward to affect the needles. Cells from the Pinea get left behind. Pycnidia (black fungal bodies) can be found at the base of the needles.

The fungal cells are also found on the new stems (pine shoot).This cell producing fungus is commonly mistaken for contamination caused by moth larvae. To determine if you have Diplodia or moth contamination, take a look for larvae tunnels near the shoot.

CALL TO BOOK AN ESTIMATE

HOW TO MANAGE THE PROBLEM

Diplodia Tip Blight thrives in wet weather conditions and makes for easy contamination.. The Diplodia cells are most actively produced in the early spring and fall, however they become most evident in later spring and summer. In the spring plants are more susceptible to fungal cells as new shoots are growing and elongating.

We are a family owned and operated passionate team of professionals. As hands-on owners and operators, we will be on site from the time of the call including when your property is serviced, inspected and cleaned. Choose Twelve Oaks, with over 15 years of arboreal experience you can guarantee that your request will be completed efficiently and effectively. Don't take a risk when it comes to your home and your assets. Call today.